Saturday was one of those times everything just comes together.

As of early afternoon Friday, I still had no idea what I wanted to hike over the weekend. I would have loved to make the 14ers.com Fall Gathering in Lake City, but with a three-day trip to Vegas right around the corner, I wanted to spend a bit of time Sunday at home with Kate, Remy, yardwork and Carolina Panthers football.

What I did have was interest from two of my favorite climbing partners, Ryan Kushner and Matt Speth. We bounced ideas back-and-forth until it seemed unlikely we’d ever reach a consensus. I was starting to resign myself to a mellow solo hike when a mutually interesting goal finally emerged: the West Ridge of Quandary Peak.

Ryan also recruited a few of his other friends, local climbing celebrities Alan Arnette (fresh back from success on K2), Jim Davidson (author of The Ledge) and Chris Tomer (FOX31/Channel 2 meteorologist). They agreed to join after their original goal of the Bells Traverse fell through due to last week’s snowfall. It was my first time hiking with all three of them, though I’ve rubbed shoulders and shaken hands at various events over the years.

We opted for a gentlemanly start of 8:30 a.m. Saturday. The route generally takes 6-8 hours roundtrip, and with no more fear of monsoonal thunderstorms, there wasn’t much reason to set an alarm for zero-dark-thirty. Ryan, Matt and I met Alan and Jim at the trailhead and decided to set up a car shuttle, leaving one vehicle at the base of the East Ridge and piling into the other to head to the Blue Lakes Dam near the start of the West Ridge.

The trail was mostly dry as we followed it up into a hanging basin toward the saddle between Quandary Peak and Fletcher Mountain. The majority of our time was spent discussing a potential fundraiser event and spying ice lines, which are starting to form all over the high country.

Chris was waiting for us on the saddle after starting early to tack on Fletcher Mountain. Most of the route came into view for the first time, with a largely mellow-looking ridge interrupted by a few daunting rock spires. The top — and the route’s two cruxes — remained out of sight beyond a false summit.

Easy scrambling and narrow Class 2 sections led to an old mining trail on the north side of the peak. I used the mental break to chat with Jim about The Ledge and reminisce with he and Speth about our Rainier experiences. Once over the dominant false summit, the cruxes came into view and our minds returned to the task at hand. 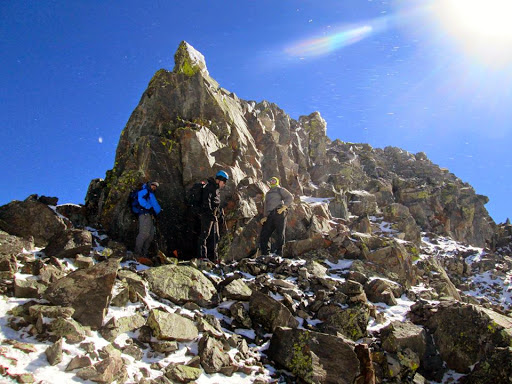 Snow conditions dictated that we stick to the ridge. Easier options exist in the summer by dropping down a ways, but the mountains had received a decent dump of snow earlier in the week. The north face in particular looked almost winterish. With Alan, Ryan and Chris leading, we took turns negotiating several exposed Class 4 and 5.easy sections. The first summer “crux” was actually a nice break in the action. It was my first time on the route, and I naively thought we’d bypassed all the difficulties by the time the worst difficulties actually started around 14,000’.

After another short, narrow Class 2 ridge walk, we found ourselves going up and over several spires. The last one required a steep 15-foot  Class 4 downclimb with a couple long steps to reach the relative safety of a lofty notch. From there we could see the second summer crux, which was said to be the most difficult section of the route. We were well to climber’s right of it, on the ridge proper. An ascending traverse across snowy Class 3/4 ledges put us back on track right as the climbing laid back to easy Class 2 walking. 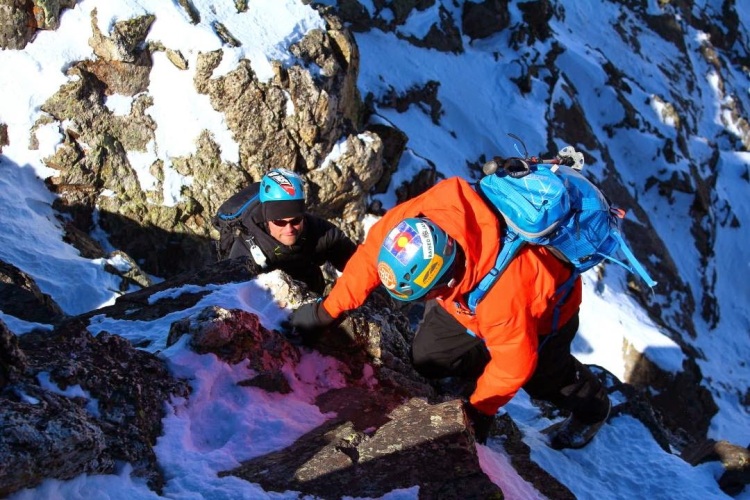 The wind had howled steadily between 15-25 miles per hour most of the day, and near the summit it nearly doubled. We staggered the last 100 yards to the highest point and gratefully cowered in a wind shelter to eat, drink and rest.

We stayed on top for about 15 minutes, snapping a couple group shots before heading down the standard East Ridge route. A few weeks had passed since I’d last visited the mountains, and seeing them coated with snow brought pure joy. Summer climbing is enjoyable in its own way, but I won’t miss the crowds. There’s also nothing more uplifting than looking out at a sea of white-capped peaks in all directions. It’s the definition of beauty. 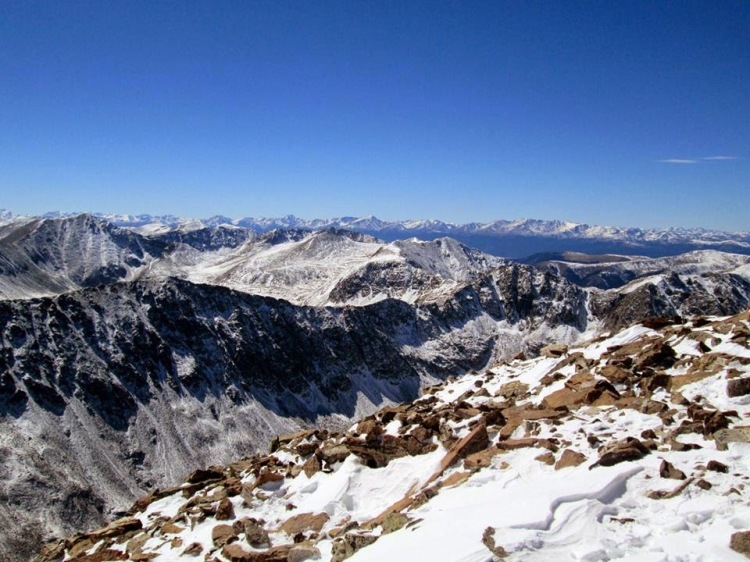 The walk down was uneventful. We encountered 15-20 other hikers making their way up or down the East Ridge, a far cry from the 100s that tackle Quandary every summer Saturday. The car shuttle ended up being a godsend, as most of us were pretty wiped from spending so much time in the wind on exposed terrain. Not to mention, my mountaineering boots had turned my feet to mush. It was my first time wearing anything but trail runners in months. Time to toughen up.

It felt good to succeed on a fairly challenging route after a summer spent on Class 1, Class 2 and easy Class 3 peaks due to my ongoing recovery from shoulder surgery. It’s mostly a mental thing now, and Quandary’s West Ridge was a big step forward. I just hope I’ll be full-go by ice season, which looks to be starting here shortly…

2 thoughts on “A Winter Preview on Quandary’s West Ridge”